Monday 25th February….Tan An to Saigon…..
This was a much discussed ride. Our ultimate ride of the trip needed careful planning due to the high density of traffic in Saigon….or Ho Chi Minh city (to give it it’s more modern name).
After much deliberation we opted for a quieter route rather than the busy main roads. A great decision as we ride through leafy lanes and sleepy villages. We took a ferry over a Mekong tributary and several small bridges. The locals were still waving and shouting, “Hello, hello!”. Right to the last day!
When we emerged into the city the reality of the traffic hit us…..like a sledgehammer! Negotiating this traffic needs concentration and…some other things…..
We eventually found our hotel and we checked in, seeing western tourists for the first time in a few days.
We also went to the rooftop bar for an ice cold beer that I feel we deserved!
We have cycled from northern Thailand to the southern tip of Indochina via Laos and Cambodia.
Many months of planning. Lots of cycling training in preparation. Decisions on what to take, etc etc.
We made many excellent decisions but we still brought some things that we simply did not need.
We lost things along the way……..but………we acquired so many incredible memories that no one can ever take. We smiled and laughed with locals who spoke no English, we waved and shouted “Sabaidee!” Or “Hello! Hello!” thousands of times. I hope (and believe) we left behind many smiles (and balloon dogs of course).
It has occasionally been emotional. I cannot deny that the hospitality given to us by these people has been so humbling that it has moved me close to tears at times.
As a team, we have been 100% united. It’s not easy, 24\7 with the same two people but it has been harmonious…..two great mates….a privilege to know them.
Today we will pack the bikes into boxes.
We will also do some sightseeing. Saigon has a buzz like no other…..
The blog will continue for a few days……without the cycling bit!
MJ 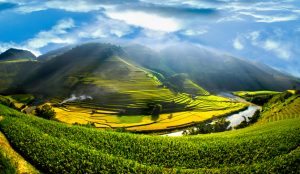 Thursday 21st February……eventful…… Well today we woke up early and started cycling to see the floating markets that Can Tho is famous for. Unfortunately one of the trio became unwell (no alcohol involved!!!!) and we Read more…